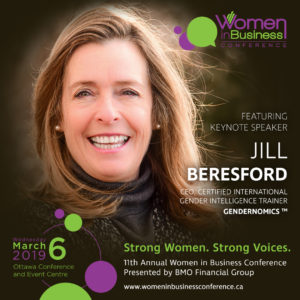 The science behind gender differences.
(and how women can profit from them)

“I wish I knew then what I know now.”

Jill founded Genderversity after earning an MBA from Boston University and 20 years thriving in male-dominated corporate environments. She learned that businesses that consider female senior leadership equal to male leadership outperform those that don’t.

Genderversity has been educating business on the financial impact of gender diversity using leading-edge, international gender science since 2014. Genderversity applies why and how to our gender differences, thereby ultimately maximizing corporate profitability.

Only 5% of publicly held companies are led by female CEOs. Jill has encouraged and supported women to own their potential and rise through the ranks since the early 1990s.

The Science Behind Our Gender Differences and How Women Can Capitalize on Those Differences!

Intuitively we know we are different than men, but it is only with the recent advances in neuro-science that are we able to understand how to work and succeed in business with these differences.

The Rule of Three:

Why should this matter to you?

What audience members can take away:

Jill is a Certified International Gender Intelligence Trainer and Facilitator and a 2017 recipient of Star Performer Top Business Advisor in Massachusetts.  Genderversity (Formerly known as Gendernomics™)  applies leading edge gender science research to show businesses how to deliver up to 65% more profitability from their organizations.

Jill started her business career at age 8 here in Canada working in her father’s manufacturing company located in Ontario.  Her father played a huge mentoring role in Jill’s business growth and career.

After leaving college, Jill worked for one of the world’s Top 10 Advertising Agencies where she became the second youngest person to ever be promoted to Vice-President.  As VP, Account Director, Jill managed clients like Procter & Gamble, General Foods, Beecham and Revlon.  She left Canada and her advertising career to become involved in a troubled manufacturing company in the Boston area, where over a 10-year period she rose from VP Marketing to CEO.  Harvard Business School wrote and taught a case study about Jill and her Marketing programs that turned the troubled manufacturer from near-bankruptcy into profitability.

She interviewed for the CEO job as the company teetered on the brink of bankruptcy following corporate malfeasance by the prior CEO.   During the interview process for the CEO position, she asked the all-male Board, “Why are you interviewing me for this CEO position?” The answer she got was very surprising – “Because we can’t find a man to take the job – no man wants his name on a certain failure”.

Jill took the job anyway and we are certain you will ask her reasons why!  She was successful in keeping the publicly-held company out of bankruptcy and turned it around into profitability ultimately selling it to a Private Equity Group.  At that time, only 3% of the world’s companies were led by a female CEO and today that number is only 5% and has stalled at the large corporation level.

After the sale of the Company in the early 2000’s Jill looked for, but was not successful, in getting another CEO position.  So she started her own company doing turn-around and restructuring work – going into troubled businesses and trying to fix them which she also did very successfully working on companies ranging from $125MM up to $2 billion in revenues.

In 2011, while reading an article in Harvard Business Review about “The Glass Cliff”,  Jill had an “AHA” moment.  Harvard had conducted research that clearly demonstrated that women who took on CEO work in periods of turmoil or crises and turned the company around, never got hired again as a CEO.  Continuing her research into Glass Ceilings and Glass Cliffs led Jill into the many studies published since 2001 about how businesses that take on senior female leadership outperform those that don’t.  She took the deep dive into the rapidly-growing area of gender science to learn why this is the case.

Combining her CEO leadership and turn-around experience with what she learned from the vast international body of Gender Science, Jill launched Genderversity. Genderversity works with corporations to teach the gender-science differences between men and women and applies the “why” and “how to” for those organizations who want the well-documented and proven improved economics that gender diversity brings to Corporations.

She sits on three different Corporate Boards.  She consults to the largest mutual bank in the U.S.  for their Business Equity Initiative program and to Goldman Sachs for their 10,000 small business program.  Most recently, the American Small Business Development Centers recognized Jill as the top small business advisor in Massachusetts where she was awarded the coveted State Star Performer award.

Jill’s M.B.A. is from Boston University.